When Charlotte and Fain McMullan bought their historic antebellum home on Rogers Avenue in the early 1970s, the 6,000 square foot house enchanted their young daughters. 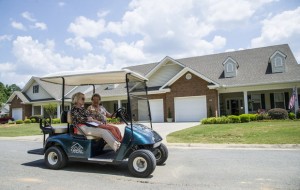 Joyce Reynolds rides back to the office with salesperson Jimmie Powell after looking at one of the units at The Gables on Forsyth Road in Macon. Reynolds is looking to downsize her home.
WOODY MARSHALL — wmarshall@macon.com

They had plenty of room for busy little girls and frequent spend-the-night parties in the five bedrooms on two floors. The romantic balcony overlooking the columned porch was the stuff of fairy tales.

Soon after the move, Fain’s widowed mother moved into a comfortable downstairs suite where she remained until her death in the late 1990s. Their home was also a hub of activity for Charlotte and Fain — who enjoyed entertaining the famous, the infamous or just the neighbors — on the porch, in the spacious dining room or throughout the house for black tie galas and holidays.

The McMullans brag about the 15 weddings, including three for their daughters, held in the grand center hall, with plenty of room for receptions afterward. The house must be a magic charm, for there have been no divorces among those 15 couples. But, marrying your daughters and losing a grandmother means a house devoid of the sounds of family that for years filled those stately rooms.

“Fain was not interested in leaving that house and all the furniture we had acquired over the years,” says Charlotte of her persistent efforts to dislodge her husband from a home that held so many fond memories.

LOOKING FOR THE COZY COTTAGE

For months, Charlotte explored a couple of stable, nearby neighborhoods that appealed to her in the search for a small but comfortable home.

Thinking of future circumstances affected by aging and retirement, she wanted a brick or stucco one-story cottage, “something like the little house in the ‘Quiet Man,’’’ Charlotte said, referring to the 1952 Oscar winning John Ford movie starring John Wayne and Maureen O’Hara. And, she found it on one of the days she had talked Fain into riding with her as she made her neighborhood rounds.

The McMullans, partners in their own accounting firm, were still working when Charlotte started this search, so relocating would be daunting. The 1,800 square foot house they purchased had been occupied for years by the same family and needed major renovation.

“For over a year we treated the new house as our ‘summer house,’ the one we escaped to on the weekends when our friends were leaving for St. Simons and Amelia Island,” Charlotte remembers. The new house has a swimming pool, which appealed to Fain, who prefers water exercise.

With no furniture but a few pieces left behind by the previous owners, they pretended they were camping, using what Charlotte called a “two steak grill” to fix dinner and swimming at their private in-town “resort.” The hard work was yet to come.

DON’T MOVE IN UNTIL THE WORK IS DONE

The McMullans hired Terry Holland, a local interior designer, to redesign the interior of the house to accommodate their new, radically altered life. Holland converted a crude concrete walled back porch to a brightly lit sunroom.

Removing the partition wall between two small bedrooms and robbing some space from the sunroom created a large master bedroom with a walk-in closet. An unwieldy arrangement of doors at the front entrance was redesigned as a small foyer with a couple of doors closed to fashion another large closet for the guest bedroom.

The massive pieces of furniture were sold from the Rogers Avenue house, which is not yet on the market. However, they are getting close to listing it now that one of Fain’s requests has been fulfilled. He did not want to sell or leave behind his pool table.

Recently, his new billiard room, a little house behind the pool, has been completed. Memorabilia hangs on the walls; books are in the bookcases and the pool table is home again, in the man cave. The McMullans are retired now. A dainty poodle has taken the place of the German shepherds they had in larger quarters, and the pool is open, ready for the grandchildren’s next visit. LEAVING HER CRITTERS

When Joyce Reynolds found her slice of paradise, over 18 acres along the Ocmulgee River, she planned to be there indefinitely. Her salt box contemporary house sits against a backdrop of hardwoods and pines. Her stable housed the horses she rode to explore every path for miles around, and the river was the site of weekend canoe trips.

She affectionately called the property the Tick Farm when the house was under construction, but ticks were minor nuisances considering the decades she was entertained by the abundant wildlife.

“I recently watched a female turkey, from the living room window, looking for a place to nest, the same ritual I have watched for years,” she recounts of the many instances she has been privy to the activity of the various animals that also considered her property their home. When asked what she misses most about leaving her house, Reynolds said, “watching my critters.”

Built to maximize the views from every room through wide expanses of glass, the house has a balcony spanning the vaulted living room from which Reynolds had a commanding view of the outside when going to and from the master bedroom upstairs.

The downstairs bedrooms have been empty of children and guests for years. Reynolds had a long career in the insurance and investment industry before retiring a couple of years ago to spend more time on the river and traveling.

Considering the options when her house sold, Reynolds looked at some of the condominiums, town homes and apartment complexes in Macon. She also considered planned living communities for retirees such as Carlyle Place and The Gables. No more did she did want the upkeep of a yard or a house, but wanted to weigh the pluses and minuses of ownership vs. renting.

“It still makes sense to invest in property as long as much of the upkeep is part of the package and the burden is not mine,” she said. However, she wants interesting scenery and square footage on one floor that is manageable for one person. “I was probably living in about 1,000 square feet of my house, so I don’t need a lot of space,” she says.

Reynolds is enjoying the search, and expects to have made her decision by the time this goes to press. Her advice to anyone going through the process is, “Be realistic about your circumstances and future needs so you make the right decision.”

Reynolds also hired Terry Holland to help her decide the most appropriate furniture to keep for predictably smaller spaces. She has moved few times in her adult life so this giant step was “overwhelming” because of all the moving decisions while selling a house.

So far, she has done the right things to eliminate some of the angst of a significant move — hired a designer to help with furnishing decisions, listed the house rather than selling it herself and thoroughly checked out her options before moving.

Katherine Walden is an interior designer. Contact her at 478-742-2224 or kwaldenint@aol.com.