According to the LA Times, Hillary Clinton proposed a new tax break Sunday for those who care for aging parents and grandparents.
The Democratic presidential candidate touted her latest proposal at a town hall-style meeting in this Mississippi River city about 200 miles east of Des Moines. She is seeking a tax credit to help offset up to $6,000 in caregiving costs for elderly family members. The credit would apply to 20{c17a68d0c485b2bb970b2407a228834b2c67946a23aa769eb01fe7f378a2c331} of those expenses for a maximum tax bill savings of $1,200.

“We need to recognize the value of the work that caregivers give to all of us, both those who are paid and the great number who are unpaid,” Clinton told the crowd of more than 400 people gathered at a middle school.

The caregiver proposal is part of a series of tax proposals geared at the middle class that Clinton is rolling out. In her plan, Clinton states that the number of Americans needing long-term care is expected to grow from about 12 million today to 27 million by 2050. She says family members often have to take time away from work, using vacation time or personal time to provide care.

“The lost wages and the work that is sometimes given up are costing families — especially women, who make up the majority of both paid and unpaid caregivers,” Clinton said.

The former secretary of State is also seeking to provide additional Social Security benefits to those who spend time out of the workforce to care for immediate family. She wants to enhance support for care workers and increase funding for a program that offers state-level grants to programs for caregivers. Clinton’s campaign says the plan would cost $10 billion over 10 years and would be paid for through other revenue increases.

Republican National Committee spokesman Fred Brown questioned the cost of the plan. “Hillary Clinton’s solution to every pressing policy issue is to expand government and raise taxes, and this plan is no different as it will cost hardworking Americans billions,” he said.

In Memphis on Friday, Clinton touted a tax credit of up to $5,000 for families and $2,500 for individuals, a proposal she made earlier this year. Americans with out-of-pocket healthcare expenses exceeding 5{c17a68d0c485b2bb970b2407a228834b2c67946a23aa769eb01fe7f378a2c331} of their income would be eligible for the credit. Her campaign says the tax cut would be funded through tax increases on wealthy families and by “demanding” rebates from drug manufactures.

People are living longer these days, so inevitably there are more caregivers who are forced to quit their jobs or need to provide for their aging loved ones — and this can be very expensive. Democratic presidential candidate Hillary Clinton is proposing a new tax break for those caring for elderly or disabled family members to help with these expenses. 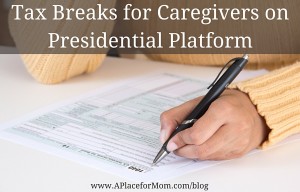