Senior Drivers on the Road

According to the Centers for Disease Control and Prevention (CDC), the risk of being injured or killed in a motor vehicle crash increases as you age, and today there is an almost 34{c17a68d0c485b2bb970b2407a228834b2c67946a23aa769eb01fe7f378a2c331} increase of licensed older drivers on the road than there was in 1999. The reason for this is two-fold: There is an exponentially large aging population. People are living longer. The National Highway Traffic Safety Administration (NHTSA) also reports that older drivers are more likely to die in intersection accidents and that the task of making a left turn becomes more challenging with age.

Should Seniors Be Required to Take Driving Tests?

Most families are reluctant to have the uncomfortable driving conversation with parents as they get older. But the harsh reality is that if we don’t have “the talk” with Mom and Dad about when it’s time to take away their keys, they may put themselves or others at risk on the road. So, should seniors be required to take driving tests? When to take away keys from elderly drivers is a highly controversial topic. It makes sense; driving signifies freedom and independence — and no one wants to take away those privileges. When lack of driving skill puts an elderly person’s life and others’ lives at risk, it’s time to take away the keys. It’s knowing when this time comes that can be the challenge. 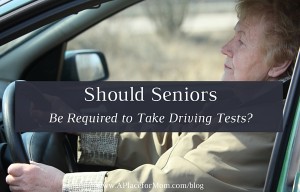